Governing and enhancing the production and distribution of knowledge, basically the digital creativity.

This project has the aim of spreading the results and products to everyone of the educational and professional actions realised by the schools within the PTOF projects and increasing the use of digital technologies by the students and teachers (PDM).

The project called “Web TV a Scuola” proposed and fulfilled by the M.Pluchinotta institute of Sant’Agata Li Battiati (CT), during the last trimester allowed to promote awareness and active involvement of about 40 pupils belonging to the first and second year. They made up the ‘drafting team’. The 40 pupils have conceived and produced information and multimedia products concerning school initiatives and activities undertaken and completed during the year school through methodologies and communication’s technologies.

Among the motivations that led us to the awareness that unfortunately during this time there are several Fake news spreading rapidly on the web and social media there is no better way to teach a critical approach to the evaluation of a news than to “create it”. And that’s what we did with the Pluchinotta’s students. We created correct information, making them aware of how to build a proper news. We worked together, enhancing their skills and their inclinations, in a collaborative and non-competitive way. We wanted to promote and facilitate the languages of multimedia both as an ability to understand and use the different tools, and as the adoption of new cognitive styles in study, investigation, communication and design. The choice to use a means such as web TV has given us the opportunity to use tools which go through every field of communication such as the writing and words. The video, the cartoon and the moving image have helped us to divulge the information and to document events. We offered to the writing and to the spoken service new expressive and engaging potentiality. We have transformed the class into an editorial office, contaminating the didactic approach with the contribution of valid professionals such as journalists, publishers, video makers, post production manager’s video and sound and the television director. Some of the professors involved in the project took part in these meetings as well.

The editing of the “Pluchinotta web tv” is full of ideas and work. In less than three months we have created the web tv, the news, the services, the videos but also the graphics, the logos, the musical staples and the acronyms. We had students acting as journalists, cameramen, conductors, video makers, directors and technicians who, through the project, approached journalistic information methodically putting into practice what they had learned during the formative meetings. With great satisfaction, we discovered talents and passions among the students. Surely this short but intense experience made the pupils enjoy the magic of the journalistic world. The greetings, now, is to put into the network more schools to exploit the potential of webTV to involve teachers, parents and guests on subjects of a scholastic, social and cultural nature to encourage comparison and exchange of ideas, experiences and reflections.

Workshops and meetings to inspire institutions, businesses and stakeholders.

Presentation of  concrete ideas with strong impact on the territory: “Data-Highway and 3DLab-Sicilia”

We have devised and we are promoting a series of stakeholder workshops, with reference to two Data-Highway and 3DLab-Sicilia projects, under assessment of Action 1.1.5: “Research, Technological Development and Innovation” of the PO FESR Sicily 2014- 2020, of the Regional Strategy for Smart Specialization (S3-Sicily). 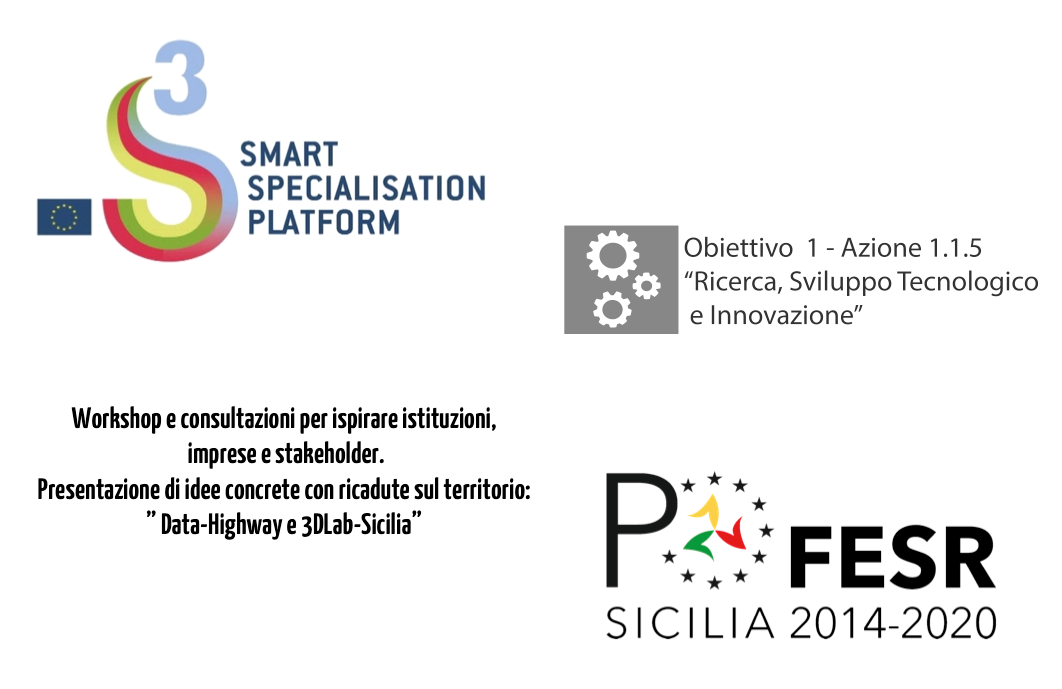 The stakeholder workshops involve politicians, companies, institutions, research centers and civil society in order to identify priorities and suggestions to inspire a successful spatial development in Sicily. Each event ends with an open debate on what has been discussed in order to collect further starting points, ideas and insights, with a series of interviews for a disseminative video which will be published later on the websites and on the social channels upon request of those among the participants.

She Means Business is a Facebook project, implemented in Italy with the collaboration of the “Fondazione Mondo Digitale” (Digital World Foundation), to promote female entrepreneurship. 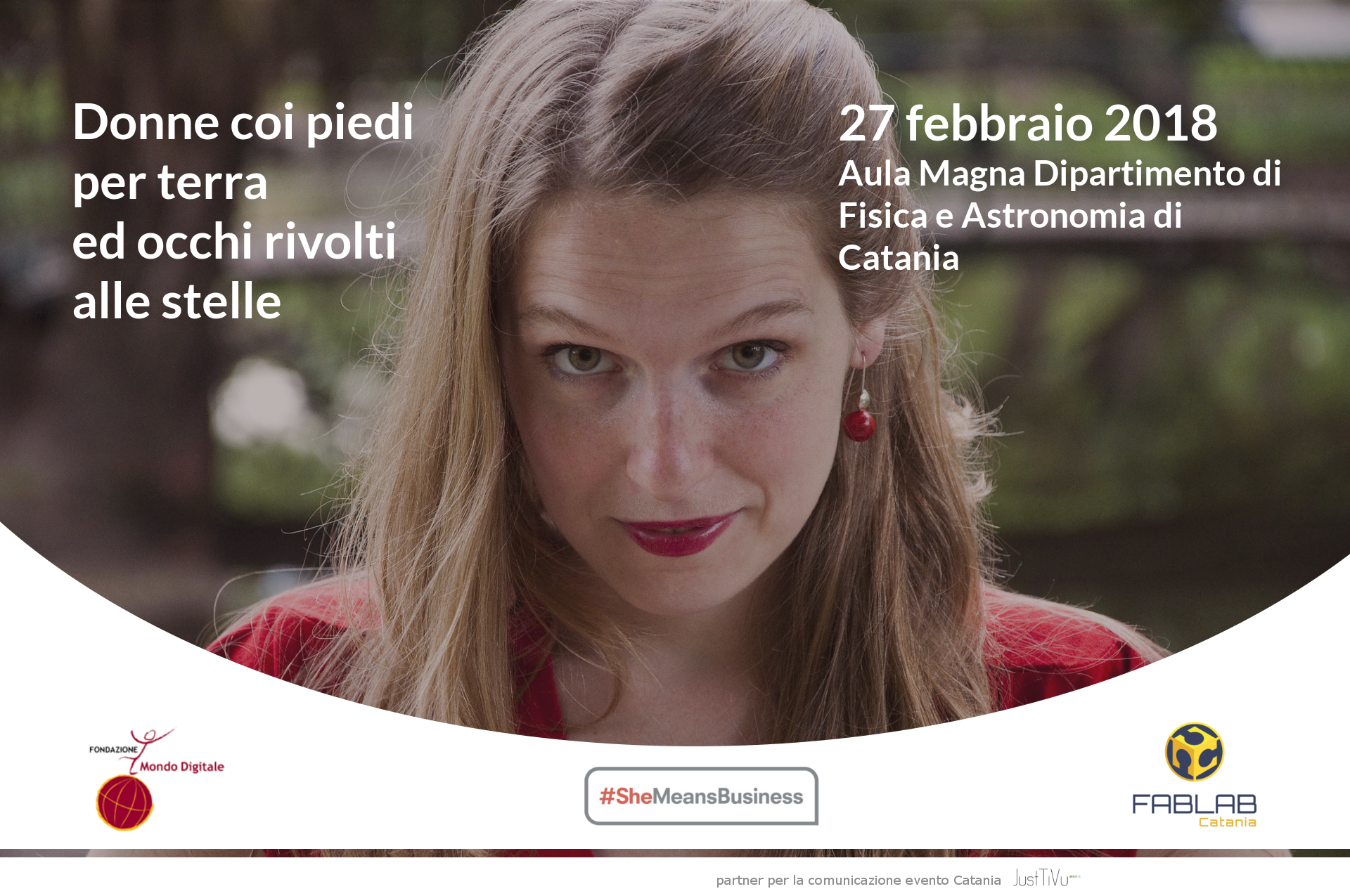 The Fablab Catania has been active to bring the training project on the Sicilian territory along with PI4, Agency of Scientific and Technological Communication, and togheter they will coordinate the Sicilian stage which will be held on February 27, 2018 at the University of Catania in the Department of Physics and Astronomy.
Press releases will be written before and after the event, they will be sent to various publications and sector groups. >>>>

EVOSiculo 2017 – An event to deepen the relationship between oil, territory and consumers.

Building a cultural path that leads to rediscover the identity of the Sicilian territory in order to enhance the excellence of our products.
PI4 will attend to the event on November 26th 2017 – Santa Maria di Licodia, CT

Overcoming the distance between genders in technology and attract young women to the IT sector. It is important to provide examples of success and support the women involved, encouraging them to seize these opportunities.
PI4 attended the event which took place in Catania on November 13th and 14th 2017

With “Fiera delle Idee” we wanted to create an opportunity for a pro-active meeting between supply and demand in relation to research and innovation in order to improve the creation of project proposals for the next notice for the PO-FESR 2014-2020.

Agenda of the day and material viewable here!